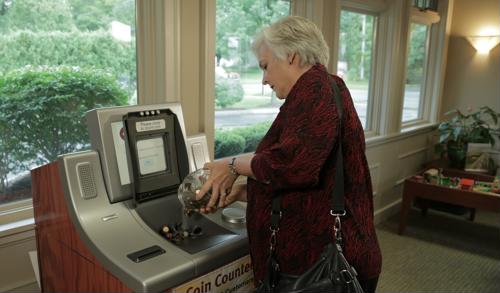 Bank branches must offer convenience and relevant services to attract and maintain a strong customer base, but must also be careful not to overextend themselves in terms of labor costs and other operational considerations. Self-service coin counters offer a unique and attractive solution, automating what was once a time-consuming process for both tellers and patrons and allowing visitors to use the machines whenever they want. With coin counting and redemption more effective and a faster overall process, it's no surprise these machines can help bank branches stand out from the competition and keep customers happy.

According to research conducted by the Federal Deposit Insurance Corporation, the growth and contraction of bank branches tends to follow an alternating trend. Long, relatively slow periods of expansion are eventually met with a similarly slow reduction in total branches across the country. Three such cycles have taken place since 1987, with periods of growth coinciding with the recession of the late 1980s and the Great Recession of the late 2000s. What's interesting is, despite the general recovery of the U.S. economy in the intervening years, the downward trend started in 2009 continued through 2014, the last year for which complete data is available. Overall, the number of bank offices has declined nearly 5 percent in this cycle, with about 95,000 active units in 2014.

The changing face of banking may be a contributing or leading factor in this continued decline. For the first time in many decades, consumer technology has greatly changed how individual consumers interact with banks. Plenty of options now exist to either reduce reliance on physical branches for some patrons, such as remote capture and deposit for checks, and ATMs continue to grow in popularity and ubiquity. A restructuring of the classic branch model has been in various stages of progression among banks large and small for some time to effectively respond to these changes.

Self-service coin counters can help bank branches present a more modern, useful and engaging identity to patrons. Exchanging coins for cash, whether to take home or to use for a deposit, can't be conducted remotely. Offering the most efficient and least time-consuming method for cashing in loose coins is a great addition to branches looking to maintain relevance and stand out from the competition.