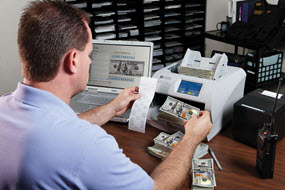 How one law enforcement agency is winning the war on drugs with the help of high-speed money counters.

The war on drugs rages on, and in this country, opioids are winning. It's requiring an all-hands-on-deck mentality, with agents out in the field trying to get those drugs off the streets. One agency that knows a little about that is the Pennsylvania Attorney General Bureau of Narcotics Investigation.

The statewide agency is made up of eight regional offices with more than 300 agents. Infiltration of drug trafficking organizations often requires agents to purchase drugs or pay informants with cash provided by the Bureau. Counting all of that money, capturing an image of every serial number and recording the text value of those serial numbers, falls on agents as well.

Without today's technology, it was a tedious, multi-step process to inventory cash used in buys, as well as money collected in seizures. It meant physically standing at a copy machine copying all the bills, which were then transferred to a secretary who entered each denomination, each serial number, and each series into a central database. As you can imagine, the process was incredibly time consuming and prone to human error. Error is all too common, but for them, mistakes could mean snags for the prosecution if serial numbers on seized money weren't accurate and thus didn't match the serial numbers on the money they used to make the buy.

They turned to the JetScan iFX, designed for law enforcement. Not only did the machines make money processing and documenting a snap, but all nine machines are connected to the agency’s Case Expense Tracking System, a web-based tool that allows agents to instantly compare buy money with seized money statewide. When an agent uses the JetScan iFX to scan currency, an image of every serial number is automatically sent to the database along with their name, case number and the currency total. All seized currency is automatically compared by serial number to the bills in the database — allowing agents to track the movement of currency and drugs throughout the state.

It's one way their agency is winning the war on drugs. To find out more, get this and other case studies.