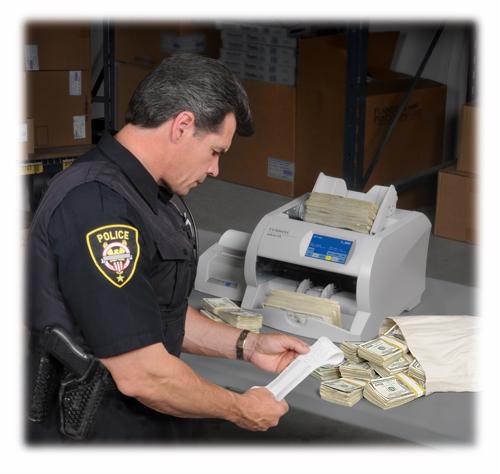 With money counters, law enforcement is capable of better handling money seizures following raids. An accurate count of cash seized by police can help them better analyze the current situation regarding illicit operations. If the criminal has a lot of bills on hand, it might indicate a higher rank within an organization. It may also identify the extent of criminal activity in an area based on the amount. These assets become evidence in the right circumstances. They can also identify if the criminal is dabbling in counterfeit money, thanks to advanced technology that identifies fakes quickly and effectively.

Money counters are especially useful in civil asset forfeiture. Police officials that seize money from a raid have the opportunity to take any cash assets found and deposit them into police accounts as a supplement to the local budget. Forfeiture is often used when a raid is necessary to arrest a criminal and stop a major illegal operation. The forfeiture deprives the criminal of a continuation of operations or attempts to escape custody.

In recent years, there are increasing accusations throughout the country that law enforcement abuses civil asset forfeiture to steal money from innocent people without due cause or on very flimsy grounds. These cases often bordered on legal theft due to technicalities in the law. There is now a movement to reform the law in such a way that regular people don't end up becoming victims to the process.

In Michigan, ABC affiliate WZZM reported the state Senate Judiciary Committee unanimously approved a bill that would change the rules of civil asset forfeiture. That bill will go to a vote in the near future. The bill, which passed the state House of Representatives in June 2015, would require detailed reports on assets seized during a criminal investigation, as well as explain where the money was sent. In addition, police must demonstrate a burden of proof by saying at least 50 percent of the money seized came from criminal activity. It will likely face approval in the near future.

For many police agencies, this change demonstrates the continued need for money counters. When law enforcement needs to comply with regulations through accurate information on cash seizures, these machines can do so with speed and efficiency. That helps demonstrate they are serving the interests of the citizens they're supposed to protect.