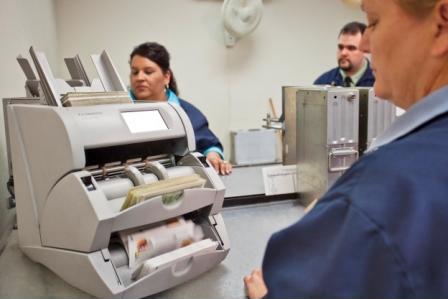 Money and ticket counters are a great way for casinos to save money while keeping customers happy. They can quickly divvy up significant returns for patrons at a much faster pace than when done manually. These devices allow employees at the cash desk to quickly make returns for winners. Cost-cutting is becoming a major issue among casinos around the country. While the Great Recession greatly hampered businesses in the course of the last few years, the gambling industry has run its own course. Changes in the way the industry functions in the future will present challenges to many businesses, and having money and ticket counters can help with managing the situation.

A sign of the times has come in the form of shrinkage in the two casino capitals in the U.S., Las Vegas and Atlantic City. Both cities, especially the latter, are undergoing major changes as a result of shifts within the industry. Part of this has to do with an increased number of states that legalized gambling since the Great Recession began, which compounded a loss in disposable income as a result of the economic situation, according to Forbes. The two forces combined to greatly hamper operations on both ends.

The Las Vegas Strip has slowly grown from its low point of $5.55 billion in revenues in 2009 to $6.5 billion in 2013. However, it's still off its peak of $6.83 billion in 2007. The casino operators are looking to diversify outside of gaming to handle lower revenues. Atlantic City, on the other hand, faces a more trying situation, with 5 of its 12 casinos shutting down in 2014, as noted by NPR.

With major operators looking to take business elsewhere, what's a casino to do? Cost cutting can be an effective solution. With employee retention being important in this situation, money and ticket counters can help alleviate this situation. By automating the process of converting tickets into cash, casinos have less risk of handling cash inside slot machines and other gaming equipment. During peak periods, it'll be more expedient for casinos to hand out winnings, which saves a lot of time and makes customers more satisfied. With a shift in how gamblers play, customer service will be an important feature of casino success in the future.