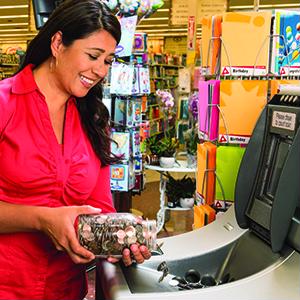 For grocery stores, there is no better tool for providing quality customer service than self-service coin counters. Instead of hoarding loose change until it becomes a hassle, patrons can just make a stop over to the local supermarket with a container of pennies, nickels and dimes and get some extra dollars out of it. They can then use the cash to supplement an in-store purchase. Even though these retailers face a lesser amount of competition, the equipment can still help differentiate from local rivals.

If there's one industry that gets extremely competitive, it's food retail. The Food Marketing Institute noted the low profit margins combined with the need to provide quality goods at a decent location can make things feisty between stores across a town or city neighborhood. As a result, competition will often be among the leading worries for supermarkets across the country. A couple years ago, the research group's Worry Index separated competition into two categories: against non-traditional sources and between local stores.

However, the circumstances changed last year. The latest Worry Index in FMI's annual "The Food Retailing Industry Speaks" report indicates non-traditional competition dropped from being the top concern in 2013 to number 10 in 2015. Local conflicts with other retailers dropped from fourth rank to sixth in the same time period. Many in the industry are confused by the revelation.

There are a few possibilities as to why there's been a significant drop in competitiveness, or at least concern for it, according to Supermarket News. There has been considerable consolidation in the industry in the last few years, leading with the merger of Albertsons and Safeway into the largest national grocery conglomerate. More importantly, several companies floundered this year, with examples including the fall of A&P and forced auction of Haggens stores, which were only recently  bought from Albertsons. Another key factor is the rise of specialization in food retail. While Whole Foods led the way in specializing in organic foods, stores now regularly pop up or undergo a rebranding to cater to specific niches in the market. A third factor is changing tastes caused by the cultural shift favoring millennials, who have a greater interest in a more personalized approach to how they purchase and receive food.

At the same time, the lack of competition presents an opportunity, for some stores may inadvertently become complacent. An adept supermarket can play to this situation through the effective use of strategic marketing and utilizing all of its assets. Effective promotion and branding will keep stores agile, enabling them to better draw in customers. Self-service coin counters can help. These machines can provide an extra service, as well as advertising opportunities through its panel real estate and on-screen ads. This enables stores to be agile and stay ahead of its rivals.