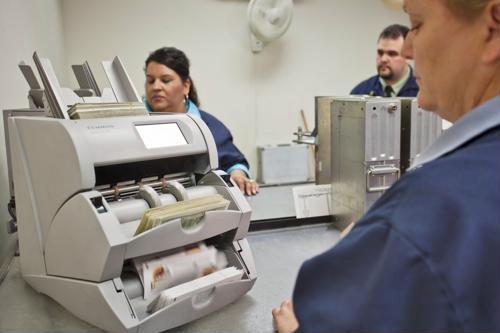 Cash counters are a reliable tool for businesses and law enforcement agencies in preventing the spread of counterfeit money. A recent incident at a Poconos casino highlighted the fact that fake money continues to be a real problem for small businesses across the U.S. Pennsylvania State Police arrested three people who were caught using phony money. The Wilkes-Barre Times-Leader said the three were nabbed after one of the $100 bills they passed was caught by security and state police assigned to the casino.

Cutting-edge technology
One of the ways the cash counting machine works is by using an ultra-violet light and magnetic reading technology that detects alterations or inconsistencies on every bit of currency that passes through the machine. Because creating the counterfeit cash  is different today that it was in the past, the new technology helps law enforcement officials and companies that rely on cash trade. Because many bills are now bleached  and then scanned on a printer, detection can be difficult. Businesses who use counterfeit-detecting cash counters are a step ahead of competitors without the machines because they can quickly and easily detect the fake cash as early as possible.

The three men nabbed at Pocono Downs are being held in lieu of $50,000 bail and it is believed that almost $4,500 on counterfeit cash was passed during their spending spree at the casino. There was no word on whether more money was passed or if police had discovered where the bills were created.

The Pennsylvania State Police said there hasn't been a lot of phony cash activity in that region, but the cases they are investigating indicate that the area is becoming a target for phony cash passers. Using state-of-the-art cash counters can help thwart counterfeiters early before they do any damage. The machines assist with detecting the bad cash, which makes it possible for small-business owners to alert authorities and put the word out that the phony bills are being passed in the area.