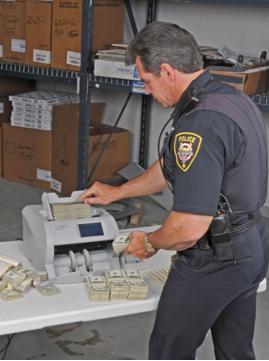 Police and sheriff departments around the U.S. are struggling to stretch their resources as far as possible, and cash counters may help them boost efficiency with fewer staff members. Many local law enforcement agencies have been forced to trim their staff, which exacerbates the challenges of preventing crime.

According to WREG, a Memphis-based CBS affiliate, the police budget in the city is set to increase this year, but the department plans to put fewer officers on the streets. The new budget forced the Memphis police department to lose approximately 200 officers through attrition. Toney Armstrong, the city's police director, fears that the department will not be able to effectively respond to calls about burglaries, car accidents and loose animals without risking injuries.

This issue reflects a larger trend happening around the U.S. Municipalities with higher crime rates need a larger force to protect citizens. In addition, some cities have much larger jurisdictions, which also requires more employees, Officer.com reported. Many departments set their staffing levels based on similar cities. Certain communities may determine how many officers to hire based on analyzing how many people it takes to handle common issues.

However, budget cuts are a significant barrier to police forces maintaining the number of officers they need. Some local departments may be able to overcome this issue by implementing new technology to boost efficiency.

Use money counters to avoid taking too much of officers' limited time
With many police and sheriff departments facing the prospect of handling the same number of calls with fewer officers, directors and superintendents need to devote employees' time to assignments that will benefit the greater good. When officers seize stolen or counterfeit money, it can be a time-consuming process to count, sort and ensure the legitimacy of the funds. Rather than using manpower on these tasks, police departments can recognize new levels of efficiency by using cash counters to handle these responsibilities instead.